How to Use Caffeine for Better, Healthier Skin

Your morning cup of coffee could do more than just wake you up. Although it’s best known for its benefits as a stimulant, caffeine can serve as a surprisingly powerful and effective ingredient for your skincare routine.

If you’re an enthusiastic browser of skincare aisles, you may have already noticed caffeine listed  as an ingredient on the packaging for creams, serums and other skincare products.

Far from being yet another fashionable but ineffective ingredient, caffeine has real benefits as a skincare product. It’s a vasoconstrictor, meaning it can potentially reduce swelling in problematic parts of your face.

It’s also a mild diuretic, meaning that it can dehydrate cells for a slimmer, tighter look. Add a few antioxidant benefits into the mix and humble old caffeine—something most of us associate with a morning espresso more than skincare—can be a powerful tool for looking your best.

Like any skincare ingredient, it’s important to use caffeine properly to unlock its key benefits (no, unfortunately, this doesn’t involve doubling your coffee consumption).

Below, we’ve covered everything you need to know about using caffeine for healthier and better looking skin, from how caffeine works as a skincare ingredient to the best ways to use caffeine for its skincare properties.

What Exactly Does Caffeine Do?

Consumed orally, such as in a cup of coffee or your favorite caffeinated energy drink, caffeine acts as a stimulant. It works quickly, making its way into your bloodstream and providing a four to six hour energy boost.

As a stimulant, caffeine targets the brain. Caffeine molecules bind to the same receptors as the chemical adenosine, blocking circulating adenosine from letting your brain feel drowsy. At the same time, your body increases its production of adrenaline, providing you with extra energy.

As a skincare ingredient, caffeine works a little differently. First, caffeine quickly penetrates the skin, taking effect not just on the surface of your face but also on the skin tissue deeper below the surface.

After this, caffeine offers a range of potential skincare benefits. From constricting blood vessels and reducing swelling to expelling fat from localized fat cells, caffeine’s properties make it quite a unique skincare ingredient.

Some of the effects of topical caffeine on your skin include:

Caffeine has several effects on your skin. It’s a natural vasoconstrictor, meaning it can constrict blood vessels and reduce inflammation. If certain parts of your face are looking puffy, sagging or otherwise inflamed, even a small amount of caffeine can make a surprising difference.

This is why you’ll often see caffeine-based creams marketed as treatments for puffy eyes. Not only does caffeine have general skincare benefits—its vasoconstrictive qualities make it useful for treating puffiness, swelling and inflammation.

It can also make your skin look smoother and more consistent. Caffeine is a natural diuretic—a chemical that expels salt and water from tissue. When applied to fat cells on the face and body, caffeine can cause localized dehydration, making your skin look and feel smoother than normal.

In short, there’s some evidence you’ll accumulate and retain less fat in your cells by applying a caffeine-based skincare product to them.

There’s also real evidence that caffeine protects the skin from UV radiation, meaning it could be a great option for sunny days and beach vacations.

Caffeine blocks a protein called ataxia telangiectasia and Rad3 related (ATR, for short). Thanks to this blocking action, caffeine could potentially reduce the risk of UV-damaged cells becoming cancerous.

This action on UV-damaged cells is noted in numerous studies, including a 2017 review of the role caffeine plays in preventing non-melanoma skin cancer.

It’s important to note that these studies aren’t totally conclusive, meaning it’s best not to think of caffeine as a replacement for sunscreen just yet. However, there is real scientific evidence that caffeine could play a role in preventing UV skin damage, adding to its skincare scorecard.

Caffeine is rich in antioxidants, meaning it could potentially play a role in preventing the visible signs of aging.

While caffeine isn’t as well established as an anti-aging substance as many other ingredients used in skincare products, its anti-aging reputation isn’t without some merit. In the same 2013 study as above, caffeine is listed as “ slowing down the process of photoaging of the skin.”

Since caffeine does offer protective benefits against UV radiation, it’s easy to see how it could potentially play a role in preventing photodamage and other factors that can lead to skin aging. 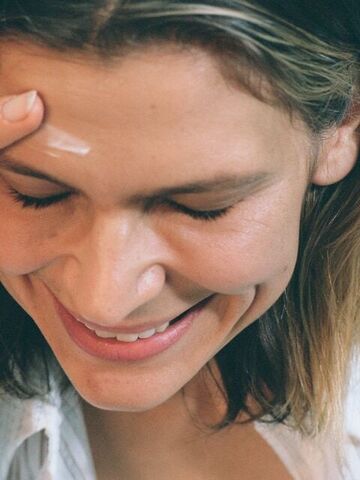 aging is inevitable. let’s do it right, ladies.

How to Use Caffeine for Your Skin

Improving your skin with caffeine is a little more complicated than just increasing your coffee consumption. While consuming caffeine in the form of coffee isn’t bad for your skin, it doesn’t quite provide all of the benefits of applying caffeine locally.

The easiest way to benefit from caffeine is to use a facial cream that contains caffeine as an active ingredient.

Like other topical ingredients, caffeine only works while you’re using it, meaning you’ll need to keep using your caffeine-based cream or other skincare product if you want to keep getting the benefits for the long term.

As for DIY caffeine masks made using coffee grounds—they’re generally best avoided. While you’ll still get some of the topical benefits of caffeine, the harshness of coffee grounds (even a fine espresso blend can scratch a little) makes these far from ideal for use on your face.

Is Caffeine Worth it as a Skincare Ingredient?

If you are looking for the best acne cream or serum for anti aging, the strength and kind of ingredients really is paramount. Caffeine has some unique and interesting benefits as a skincare ingredient. However, it’s not an ultra-powerful ingredient all on its own. You won’t get the anti-aging or acne prevention benefits of tretinoin, for example, by applying a caffeine-infused cream to your face every now and then. You will, however, get a range of unique benefits—from swelling reduction to a lower level of fat accumulation—that make caffeine worth adding to your skincare routine.

Because of this, it’s generally best to use caffeine as part of an overall skincare routine, rather than on its own. To do this, you can opt to use a facial cream that combines caffeine with other active ingredients, or just use a variety of different skincare products in tandem.

The choice is up to you. Overall, caffeine’s unique benefits make it an interesting addition to your skincare routine, especially if your goal is to reduce swelling and keep fat accumulation under control.

Want more tips and tricks for good skin? The hers blog has what you need.

This topical solution can put a stop to hair loss and may even help new hair growth. 2.0 fl oz. One month supply.